texts
in the city and the world

THE DIACHRONIC APPEAL OF KOSTAS I. SPYRIOUNIS’S PAINTINGS

… Such a type of painting deserves to be tenderly embraced by the eye; one should enjoy it with all the senses, savouring it voluptuously like the drops of an old, expensive wine. Furthermore, one should listen to the imperceptible musicality of these images in order to fully appreciate their indeterminate, at first sight, quality, the mastery of technique and the wisdom of composition …

The artist is proposing: instead of accumulated forms and objects, spaces for abstraction. Instead of a tangible, specific presentation, scenes on a metaphysical scale. Instead of heavily charged shapes, simple architectural forms and simplicity of line. And finally, instead of multicolours, he uses a limited range of earth colours.

The exceptional abilities of Kostas I. Spyriounis reveal his maturity, allowing him to stride into the future equipped with an assured technique that is supported by ageless themes.

…Now that contemporary Greek art will inevitably be read from a European viewpoint, I believe the painting of Kostas I. Spyriounis, in conjuction with the great currents of our time, will lead  us to reliable conclusions and to self-knowledge. Other, better qualified people will discuss Kostas I. Spyriounis’s painting. I, with my collector’s instinct, will confine myself to saying that this is a great work.

With love to Kostas Spyriounis for the fine work he has done.

The works of Kostas Spyriounis have been inspired by a Greece that exists only in memories.

Kostas, a worthy student of my friend and best man Yannis Tsarouchis – the only person who had predicted the loss of the neoclassical buildings – continues to depict in his own way, the beautiful Athens and Piraeus that we old timers remember.

His themes are among my personal favourites, which is why I am particularly happy to see him portraying them differently from my own folk-style painting and to admire them.

Kostas’s art has always delighted me because it reveals the sensitive, pure soul of an artist whom we all see, especially those of us who know it not only through his works, but through the man himself as well.

The poet of colour…

When time stopped on the waterfront of memory gazing mutely at the crystal moment, capturing truth in a pale mirror, the poet of twilight, creamy sunset colours spread the sadness of the times on neoclassical canvases. The only spectators, a marble Eros unwrapping hidden feelings and the benefactors of the dream, like stone figures in empty squares.

The poet of sighs. Illuminator of melancholy and incorruptible decay. Diviner of prophetic auguries which were shipwrecked in the sluggishness of noon. Abandoned to the chords of destiny.

When time stopped at the suburbs of the vastness, of the ephemeral and the fleeting, shattering the silence of equilibrium, melancholy, seated on the edge tiles of the past, donned the clouds of nostalgia and declaimed verses from the Spyriounis Passions…

I have known Kostas I. Spyriounis for a good many years even in America – and hold his art in high esteem. I have been following his career in art with interest and always with confidence in his future.

THOUGHTS ABOUT A SIGNIFICANT PAINTER

…Looking at one of his landscapes you can tell what time it is and how hot it is. …Kostas Spyriounis does not simply possess a consummate talent for painting. A flawless painted image may say nothing. His painting tells us a great deal because it expresses the rich world of a significant man.

… I love old houses. They die with dignity, still standing. Fortunately they are preserved in the drawings and paintings of talented artists who approach them through their sensitivity, emphasising their aesthetic seclusion. I have kept a programme from an exhibition two or three years ago on this subject. The painter of these houses that breathe their lovely old memories with dignity is Kostas Spyriounis, a painter of great ability with recognition in Greece and abroad, who grants immortality to these refuges of silence. I have travelled the world and lived the magic of neoclassical architecture. Kostas Spyriounis lives their myth and their poetry through his paintings. I love old houses as I would anything beautiful and noble struggling beyond time for survival. For their resistance to the oppresive ugliness of our era. 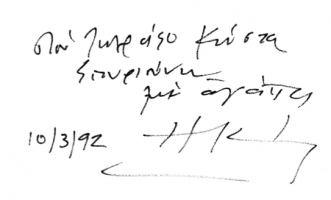 To the painter, Kostas Spyriounis, with love

To Kostas Spyriounis with love and admiration 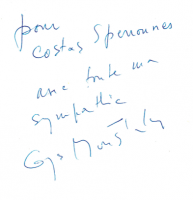 For Kostas Spyriounis with all my love 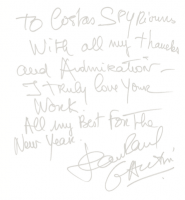 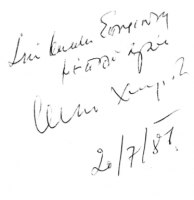 To Kostas Spyriounis with much love

Hadjidakis once said to me:

The paintings of Kostas Spyriounis – for all their technical mastery and wealth of detail – for me are filled with an unforgetable mystery.

THE METAPHYSICS OF KOSTAS SPYRIOUNIS’ PAINTING

In a first reading of Kostas Spyriounis’ painting, you realise that a serene silence leads you directly beyond, to the far side, without questions. The human presence is altogether absent from his works, except maybe for a few abstract busts or statuette of winged Eros, which do not appear accidently but perhaps to distract the viewer-reader from the main theme which is purely metaphysical.

The presence of birds is more reminiscent of spirits than leaving creatures. He achieves this metaphysical dimension in a unique painterly way by using earth colours and thick, satisfying brushstrokes as though exorcising blackness and darkness. He paints old houses, not necessarily mansions, but aesthetically refined places on which his personal intervention is obvious. He paints houses that hark back to old and ancient architecture. He avoids ugliness wherever possible and invests even the most inelegant objects with beauty. Electric wires, for example, are presented as ornaments and festive garlands on the facades of houses or along empty streets.

Heaven and earth are linked directly with shades of brown and buildings frequently give the impression of being suspended or even of being built on water. Clouds, bad weather and storms dominate his work, creating awe rather than fear.

The further you go in the reading of his painting, the more you realise that the image is only the pretext. Behind the painting there is philosophical thought and above all poetry. By means of this poetry, he takes you on long voyages into the distant future of human existence, into the end of being and the beginning of a new and unknown era. Can this landscape of our inevitable permanent destination be as calm as he depicts it, or does it portray his need to deceive himself into tranquility or rather to make the viewer think?

How can his aesthetically fine portraits depict the young people he paints as being so calm, almost Olympian, and at the same time otherworldly? Is it perhaps because in Hades we are all young people taking the place of the older ones, or because he himself would like sometime to enter that type of environment?

On the stamps he created recently with portraits of famous actors and actresses who have died, he succeeded in giving them the face of eternity in a way that an artist can rarely express, describe or render.

In any event, Kostas Spyriounis is not just another good painter, but a good poet who through his works gives us images that are not just earthly, beautiful and timeless, but sometimes enigmatic and even redemptive.

To our dear Kostas Spyriounis who has been a friend of ours and whose painting we have greatly appreciated. With much love. 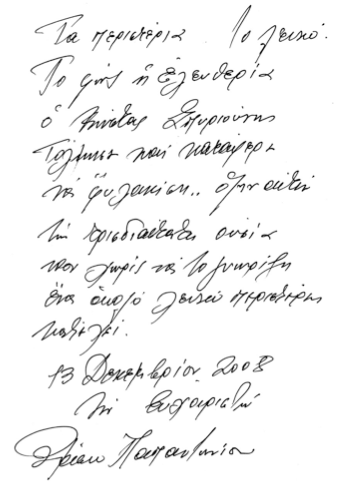 The birds, the white, the light, the freedom Kostas Spyriounis dared and succeeded in capturing all this three-dimensional essence that an ordinary white bird unwittingly possesses. 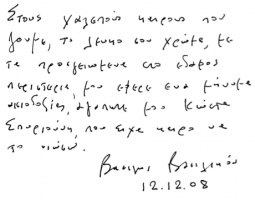 In the troubled times we live in, white as a colour, together with the pigeons on the ground, conveyed a message of optimism, my dear Kostas Spyriounis, which I haven’t felt for a long time.

ART
Kostas Spyriounis
THE SYMBOLS OF THE SECRET PRESENCE

Art has always resorted to idols and ghosts. The question, however, is when these elements serve morphological demands and when they are raised to the spiritual exaltation of symbols. In other words, the challenge is when the artist departs from the appearance of the portrayed penetrating its secret mainland and approaches the world as an internal reality and not as an external quality.

Kostas I. Spyriounis’s (Athens, 1965) painting, which was presented at his exhibition with “Ikastikos Kyklos” titled “In the city and the world,” was a study of the transition of the sensory world elements into despiritualized symbols of a personal idolatry.  His artistic world is the setting of a secret drama where people have left their mark and reached the state of the spectrum, where their presence has been replaced by the smell of their bodies. Man is suggested by his absence or otherwise through his secret presence.

His neoclassical houses appear spectrally in a timeless environment, isolated from their urban surroundings, as if they are emerging from a dreamlike state. While, in principle, they logically belong to the Athenian School, with Tsarouchis as the prominent figure, and Manousakis or Malamos as successors, Spyriounis’s neoclassical houses are, however, cut off from that given ideological climate: they are fragmented and isolated; not as part of a city web, but empty of human life. They are left dressed in their stone nakedness. Yet everywhere lurks the human presence as a threat or a blessing, as something distant and unattainable. And this is witnessed by the marble cupid breaking his bow into the stormy wilderness of an empty space or trying to break the bonds that hinder his sight. The houses are not occupied, they don’t show any trace of human presence. They are a temple of silence. They are, however, the garment of human life worth living, the shell of life. Their wilderness reflects an inner mood, metaphysical one would say, like that of Giorgio de Chirico.

His seashore landscapes reminisce in their inhuman silence and frosty winter tranquility, the swimmers in summer; jealously keeping as a souvenir of their long presence, the remnants of their action. The cupid reminisces as well!

Spyriounis, however, is a painter of the human form. When attempting to recreate it, he works as a secret icon painter in an era of iconoclasm. With calmness and nerve, with Vakirtzis’s ease and his teacher’s, Yannis Tsarouchis’s, sensitivity, he depicts the portraits with the precision of a surgical instrument and a virtuoso maestro’s skillfulness. This is about a kind of painting precise in drawing which honors Ingres’s conviction that “drawing is the probity of art.” And he draws gloriously, therefore reducing the color into a handmaiden of his drawing. 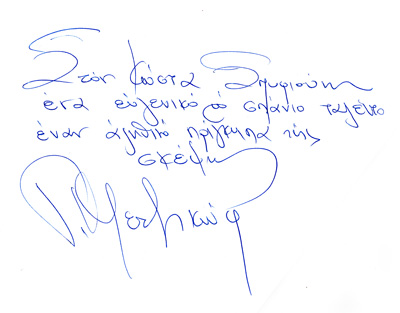 To Kostas Spyriounis a noble and rare talent a true prince of thought. 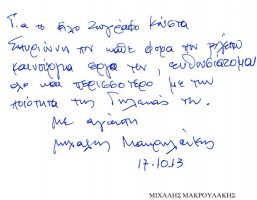 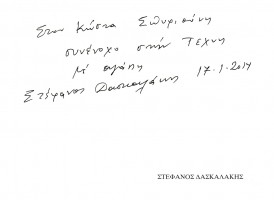 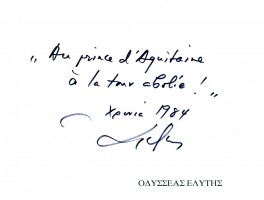 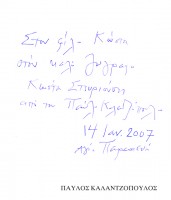 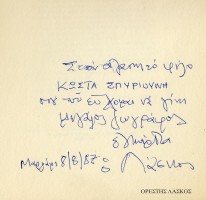 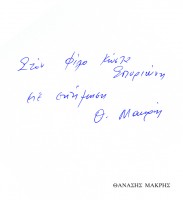 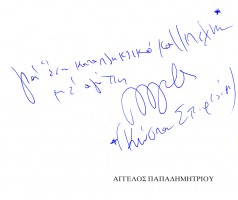 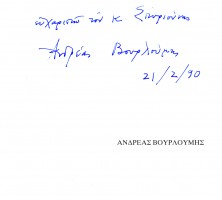 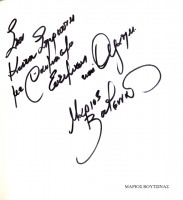 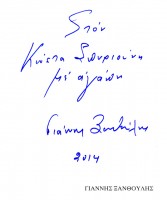