Spyriounis had promised, even though he knew he’d be reaproached: to take “the bodies of the beautiful dead who never grew old” from their pedestals and, without regrets but with tears, made them icons.

ΤHE HEADLESS STATUES OF KOSTAS SPYRIOUNIS
Kostas Spyriounis draws headless or mutilated statues on expensive white drafting paper. Kostas Spyriounis uses his pencil to draw fragments of funerary monuments from imaginary meetings of solitary – and for this reason beloved – persons wearing their ancient clothing. Chitons and shirts are tossed on the floor .

The wind seems to crack the lines of the fabric and the day cannot conceal their eclectic inclination to the good and the impassionated.

For Kostas Spyriounis with great esteem.

TO KOSTAS WITH LOVE

…Raising the eyes from the random color pictures (from K.S. file) “those whorish pictures” as Kavafis would say I saw their transformation in poetry and art through his painting.

How the body is “interpreted” losing anything unnecessarily material though never ignoring its specific voluptuous gravity or how sometimes the male body is wrapped in the liquidity, the humidity and the fog of a landscape e.g. of a dock of a port, so as not visible from what is sometimes nothing more than an inclined leg, a heel and even then, on a path of greater denudation, absent and the body itself and remained the dock itself, land and sea, getting into each other, as if the land was water, the population amphibious… 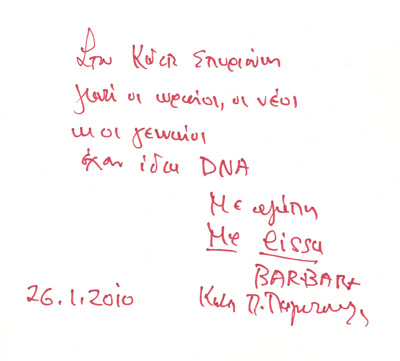 To Kostas Spyriounis because the beautiful, the young and the brave have the same DNA.

KOSTAS SPYRIOUNIS, AESTHETIC IMPRINT OF FINENESS
Kostas Spyriounis’s works are diffused with his politeness, culture and refinement. There was a time when people were looking for ways to make the natural, beautiful. The painter Kostas Spyriounis has a unique way to depict the beauty with naturalness. The spectator’s look is immersed in his works and enjoys the power of imagination, lucidity, visual clarity, simplicity, rich texture of colors and vitality of the visual language. Among the most important painters of his generation, he came of age with teachers Tsarouchis, Natalia Mela and Tassos Margaritof. His one-man exhibitions with portraits, nudes, neoclassical buildings, landscapes of Evia and the marvelous wreaths of ivy, pomegranate, olive, laurel, vine, poppies marked his aesthetic imprint.

In 2009 the Greek Post Office commissioned him to paint the series of stamps ”Greek Actors and Actresses”. Creating stamps is a technically difficult and very demanding art. With the right doses of nostalgia and photorealism, the series quickly became a favorite among philatelists and a collector’s item. His paintings are displayed in museums and galleries and acquired by collectors around the world. This fact prompted the U.S. State Department to invite him to the International Visitor Program (2007). Exhibitions of his have been hosted in the Greek embassy in Washington and the Greek Consulate in New York. It is no accident that the genius Tsarouchis described his works as “fine and ones that can defend themselves”. Furthermore, it is Dimitris Tsitouras who with the collector’s instinct called his art “great painting”.